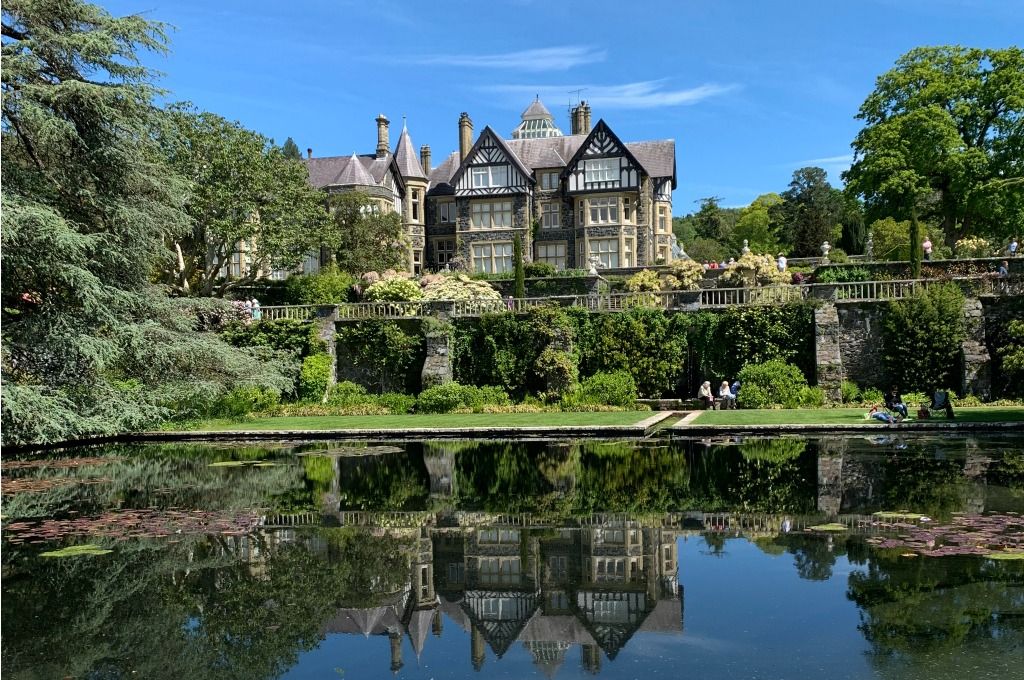 Described as one of the most beautiful gardens in the UK, Bodnant Garden nestles in the foothills of Snowdonia and is only a 14 minute drive from the resort of Llandudno, so if you’re staying at the award winning Imperial Hotel it is most definitely worth a visit.

The gardens were founded in 1874 by industrialist Henry Pochin and are formed around a natural dell with its own river.  In fact Bodnant means Dwelling by a Stream so within the Garden’s 80 acres you will find ornamental ponds, streams, waterfalls and lakes.  Pochin’s vision went on to create an all-year round garden which changes not only with the seasons but month by month, so there is always something to be enjoyed from its Italianate formal gardens, shrub-filled glades, native woodland and meadows, dell and water gardens.

This horticultural paradise is renowned for its collection of Rhododendrons from China and Tibet, Magnolias and Camelias from China and a host of other unique plants including the Chilean Firebrush and the Himalayan Blue Poppy, 42 Champion Trees (officially registered as being the biggest and best examples of their kind in the UK) as well as its Laburnum Arch.

Bodnant was gifted to the National Trust in 1949 so that it would “always remain a joy and an inspiration to garden lovers.”  To give you more of an insight and an idea of what to see and when, we recently spent a day in the glorious sunshine and share with you this wonder of Wales:

The Laburnum Arch was the first thing we came to as this is located near to the visitor centre.  It needed a few more days of sunshine to be in full bloom but at 180ft long it was still a sight to behold.  Our advice though is to get there as early as you can especially if you want to try and take a photo looking down the arch as the chances of getting this without lots of visitors is going to be fairly impossible!

It takes two gardeners up to a month to prune the Arch by hand – painstakingly untying, cutting back and re-tying each strand to the framework and then a further two weeks of deadheading the flowers in July. The East Garden is in Italian Renaissance Style with lawns intersected by paths, stone steps and balustrades and with a terrace linking the house to the garden.

The Winter Garden has plants suited to the rugged conditions plus “The Bath” where the Pochin’s used to bathe.  Water from here was channelled into a stream leading down through the rockery to the dell. The Glades is home to the handkerchief tree which came all the way from China in the late 1800s. The Poem is a Grade II listed building.  It has marble interior and the stained glass windows are shaped like snowflakes.  Mystery surrounds the name of the building which is believed to stand for “place of eternal memory” as it is the final resting place of the Pochin’s children.  The Poem sits on a rockery with the terrace having a theme of an ethereal white garden.  The Poem is only open periodically in the summer and we were lucky it was open when we visited. The Waterfall Bridge was established with the rebuilding of a dam on the site of an existing pool to create a waterfall.  A bridge was built across the river overlooking the crashing waterfall and the placid Mill Pond on the other.  The bridge is made of larch and there are other small stone bridges and stepping stones to help visitors meander over the streams. After Waterfall Bridge is The Dell – a valley of giant trees with evergreen conifers, North American Pines and Redwoods which are flanked by deciduous trees and shrubs.  From Winter to early Spring you’ll see daffodils and snowdrops around the base of the trees with Camellias on the valley side.  In March and April, the magnolias are in bloom and for our visit in May, the steep banks were a blaze of riotous colour from rhododendrons.  In the peak of summer you’ll see the giant Himalayan Lily which grows up to 3.5 metres high, plus the display of hydrangeas. Old Mill is a Grade II Listed Building built in the late 1820s/early 1830s as a flour mill before being extended to become a sawmill.   It is currently open to the public to view the wheel house and is used for family craft workshops, talks and demonstrations as well as providing refreshments and a seating area. The Terraces were created in the early 1900s and were filled with rose beds, pergolas of climbing wisteria and clematis, fountains, rivulets and lily pools with stunning views of the Carneddau Mountains beyond.  Unfortunately we were a couple of weeks too early to see the Rose garden in all its glory but we can only imagine how spectacular this will look in June. The Pin Mill was originally a hunting lodge in Gloucestershire, then a mill for the manufacture of pins and finally a tannery.  In was bought in 1938 and dismantled and moved brick by brick to Bodnant Garden.  It houses a ground floor gallery and hosts visiting musicians on Sunday afternoons.  The upstairs rom is only open in the summer months.  The pond before it is a awash with beautiful white and pink lilies in July. Bodnant Garden is truly beautiful and its landscape, setting and superb events means it’s not just for horticulturists, gardeners or garden-lovers but everyone and we highly recommend it as a day out.