Everything stops for Afternoon Tea

Afternoon Tea is having a resurgence helped by the huge popularity of the Great British Bake Off, and despite the TV programme’s imminent move to Channel 4 the revival of this genteel tradition with speciality teas and cakes looks set to continue. 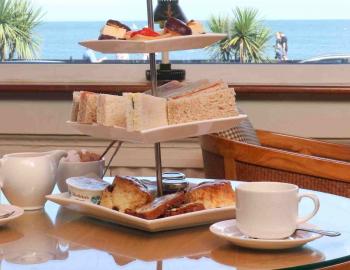 The Imperial Hotel has been serving traditional Afternoon Tea since the hotel first opened its doors in 1872, 32 years after Afternoon Tea was first introduced by the Duchess of Bedford at Woburn Abbey.  It all began with tea and simple bread and butter to stave off her hunger between lunch and dinner, but soon developed into a social occasion when the Duchess invited friends to join her for “tea in her rooms”.  On the Duchess’ return to London she continued with the occasion but included a walk or promenade in Hyde Park which raised not only the respectability of Afternoon Tea so it moved to being held in the drawing room but also its popularity.  Delicate sandwiches replaced the bread and butter, and sweet pastries and cakes were also included.  Scones with clotted cream and jam were a much later addition as they were only included in the twentieth century.

Tea rooms started to open in 1864 and as they were the place for meeting friends and also considered one of the few respectable places for women to meet without a chaperone their popularity spread throughout the country.  Music was soon added so they evolved into afternoon tea dances which were held in the stylish hotels including The Imperial and attended by the fashionable young people until the second World War.

Nowadays, Afternoon Tea is an enjoyable pastime rather than a daily occurrence. It’s a treat for holidays or weekends away, a perfect way to relax after shopping with friends or a well-earned pleasure after a good long walk.

Geoff Lofthouse, general manager of The Imperial Hotel said;  “Although traditional Afternoon Tea is not a daily ritual it is still extremely popular and popular with all ages, but the misnomer is that it should be a feast, it’s a soupcon of savouries and sweets that are enjoyed with a cup of perfectly brewed tea or with a glass of champagne to make it the perfect celebration.

“There are many variations to an Afternoon Tea menu, but all will include finger sandwiches, a variety of cakes and sweet pastries and scones with clotted cream and jam.  We also include Bara Brith, a traditional Welsh spiced fruit loaf made with tea which is delicious spread with Welsh butter.”

What can make or break the perfect Afternoon Tea is the tea itself.  While a lot of it comes down to individual preference, serving whole loose leaf teas provides more flavour and aroma as well as antioxidants as they retain most of their essential oils, but they need room and time to expand in the water to reach their full-bodied aroma.  As well as loose leaf tea, The Imperial also offers fruit teas and infusions, and the seep time of all these teas varies from as little as only 2 minutes for Green Tea to 5 minutes for Herbal Tea, and if you like your tea strong then more tea should be added rather than seeping it for longer.

Whether you prefer tea with milk or lemon is again down to personal preference but the milk should always be added after you’ve poured the tea.

Geoff concluded;  “There is more to serving the faultless cup of tea than many of us think which is why all The Imperial’s staff have received intensive training to ensure they are knowledgeable not only about the tea but also how it should be served.”

Add to this the spectacular views of Llandudno Bay from The Imperial’s Terrace and you have the perfect Traditional Afternoon Tea.

Afternoon Tea is served at The Imperial between 12pm and 6pm and to avoid disappointment we recommend booking a table by calling 01492 877466, but if you’d rather treat a friend, member of your family or a loved one Afternoon Tea Gift Vouchers are also available and can be bought online.