The Great Lakes of North Wales

When you think of great lakes you probably think of the Lake District but the region only has one official lake, Bassenthwaite Lake near Keswick and the others ie Windermere, Ullswater and Coniston are classed as meres, tarns or waters.  North Wales though can lay claim to having many more, in fact there are about 250 lakes or Llyns as they’re known in Welsh in Snowdonia National Park alone.

Here are our top six favourite lakes that are worth a visit: Llyn Padarn is our nearest and although small compared to others as it’s only 240 acres this glacially formed lake is stunningly beautiful as it nestles in the heart of Snowdonia and is part of Padarn Country Park. As well as being a popular spot for walkers, picnickers, kayakers, rowers and sailors, there are plenty of attractions to visit in the area including the National Slate Museum, Quarry Hospital Museum and a fun trip on the Llanberis Lake Railway, a narrow gauge steam train that takes you alongside Llyn Padarn. In the heart of the Denbigh Moors on a forested site is Llyn Brenig, a large man-made reservoir which boasts the highest sailing club in North Wales and an international reputation for the quality of the fishing that it plays host to the World Fly Fishing Championships. Stop off at the visitor centre to pick up information on the area as well as all the walking routes.  There’s also bikes to hire and anyone can purchase a licence to go fishing. Llyn Alaw or Lily Lake is the largest man-made lake on Anglesey and it’s a Site of Special Scientific Interest with a variety of wild fowl especially over-wintering birds including teal, northern shoveler and the whooper swan.  Visitors will find bird hides as well as several miles of footpaths although they don’t make a complete circuit of the lake.  It is also popular for fishing as it is one of the most productive lakes in Wales for wild brown trout and rainbow trout. 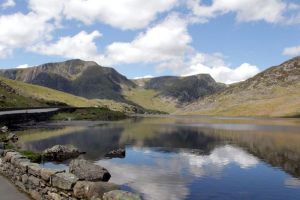 If you want to visit a lake that is surrounded in myths and legends then Llyn Ogwen needs to be at the top of your list.  The Lake is between two mountain ranges of Snowdonia, the Carneddau and the Glyderau and legend has it that Sir Bedivere cast King Arthur’s sword Excalibur into Llyn Ogwen for it to be caught by the Lady of the Lake!  Who knows whether this is true or not, but you can enjoy walking in the footsteps of actors Jude Law and Charlie Hunnam as the area was used for filming Guy Ritchie’s “Legend of the Sword”. On a much larger scale is Bala Lake or Llyn Tegid, which is the largest natural lake in Wales, not just North Wales at 1,196 acres.  The lake lies in a glacial valley in Snowdonia National Park so its beauty really is a sight to behold, and it offers visitors plenty to see and do from walking, cycling, white water canoeing, kayaking, horse riding, sailing and as the River Dee flows through it there’s also a good stock of salmon and trout so the lake is very popular with anglers.  Enjoy a ride on the narrow gauge steam train at Bala Lake Railway (Rheilffordd Llyn Tegid) which is lovely 9 mile, 1 hour journey which takes you alongside the lake with plenty of stations enabling you to get on and off when you want.  Caerau Uchaf is the highest private gardens in North Wales at over 1,000ft and as well as the garden being well worth a visit, there’s also a sunken trampoline, a wooden fort in the woods, ropes and a zip wire so plenty to keep children entertained. Bala Lake though is dwarfed in size by two man-made reservoirs.  The first is Llyn Trawsfynydd at 1,200 acres which lies between Porthmadog and Dolgellau.  It was created in the mid to late 1920s to supply water for Maentwrog Hydo-electric power station, which at the time was the largest power station in the UK, and then in the 1960s for Trawsfynydd Nuclear Power Station which is currently being decommissioned.  Now, the lake is source of adventure for visitors including fishing, walking and cycling, and it’s been the location for several films including First Knight and Hedd Wyn. Our last lake we recommend visiting is Lake Vyrnwy or Llyn Efyrnwy.  This is the second largest man-made lake and is set in the remote and beautiful Berwyn Mountains, south of Lake Bala on the edge of Snowdonia National Park.  It was built in the 1880s to supply Liverpool with fresh water as well as power to the local area and was the first large stone-built dam in the UK using great blocks of Welsh slate to create the 146ft high wall which is 120ft thick at the base and 1,165ft long – when full the lake covers an area of around 600 football pitches!  Enjoy a relatively easy 12 mile bike ride around the lake or follow one of the many walking trails.  If you’d prefer a bit more action you can also go canoeing, kayaking, sailing, windsurfing and abseiling.