Walks with a View

With sweeping mountains, glistening lakes, fabulous countryside and breathtaking coastline, North Wales is a walkers’ paradise and certainly rewards you for your effort with some spectacular views.

Whether you’re wanting a leisurely stroll or a strenuous hike, here are our five top Walks that offer views we feel can’t be beaten!

Llandudno’s Great Orme
The Great Orme is a nature reserve and Country Park that is over 350 million years old and rises 679 feet above sea level offering views of Anglesey, Puffin Island, the Isle of Man and the Lake District from the summit.  There are many walks that take you up and around the headland which are all well sign posted from town, and a Summit Trail, Nature Trail and Historic Trail as well as a free walking audio trail about the wildlife and shipwrecks, geology and wartime memories.  While you’re on your walk keep a look out for the herd of Kashmiri Goats who have been roaming the slopes for over 200 years. 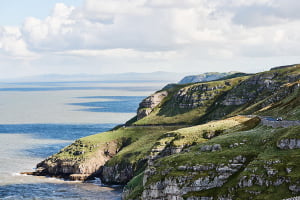 The Wales Coast Path
We’re not suggesting you walk all 870 miles of the Wales coastline but there’s a stretch of the country’s continuous coast path that takes you from Llandudno to the medieval walled town of Conwy.  You can either continue to Conwy from the Great Orme summit or alternatively take Marine Drive which takes you around the headland giving you wonderful views along the way.  You’ll then head along West Shore through to Deganwy which is on the shores of the Conwy Estuary with views across the water to Anglesey and Conwy Castle.  You’ll come into Conwy crossing the Suspension Bridge so the Estuary will be on either side and the Castle will stand majestically before you with the Snowdonia mountains behind which is pretty stunning!  As well as sightseeing around the 13th Century the Castle, there’s also Plas Mawr and Great Britain’s Smallest House. 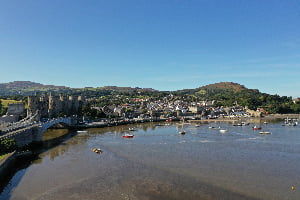 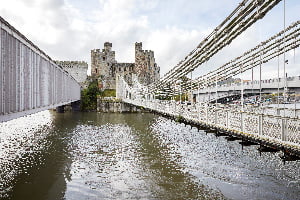 At the Park’s heart is magnificent Snowdon which is Wales’ largest mountain standing at 3,560ft high.  There are seven popular routes up to the summit which range from the easy (Llanberis Path) to the strenuous Crib Goch which is only for the very experienced!  Reaching the top is a feat for many but on a good day the rewards are outstanding with views over to the Wicklow Mountains in Ireland and the Isle of Man. 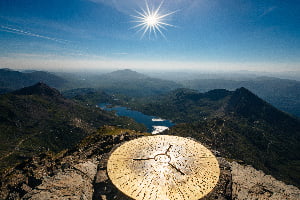 There’s also the Glyderau, a mountain group of five of Wales’ fifteen summits.  The Glyderau from Llyn Idwal route is a short walk which covers the two highest mountains – Glyder Fach and Glyder Fawr – and takes you to the much photographed Cantilever, which is an overhanging stone that can take the weight of several people standing on it. This route is accessed from the A5 near Llyn Ogwen taking you across Cwm Idwal, a national nature reserve which is one of the few places where the Snowdon Lilly grows.  This walk gives you a good view over to Snowdon as well as Tryfan and the Carneddau. 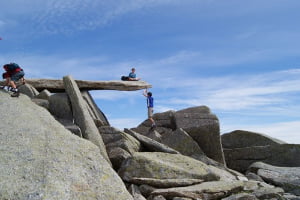 Waterfall Heaven
Aber Falls is a spectacular 120 foot waterfall at the foothills of the Carneddau range south of Abergwyngregyn that is definitely worth a visit.  It’s easily accessible and the walk is very scenic through woodland and valley which is well sign posted from the car park at Bont Newydd here’s an easy path. 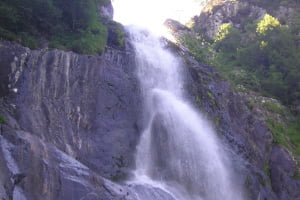 Newborough, Anglesey
This is a magical place and being an Area of Outstanding Natural Beauty with a Forest and Beach it offers a suitable walk for everyone. Walk through the sand dunes, the largest in Wales and the second largest in the UK to reach the 3½ mile stretch of long sandy beach, with spectacular views across the sea to Caernarfon Bay, with the majestic mountains of Snowdonia down as a backdrop down to the Lleyn Peninsula.  Walk down the beach and you’ll come to Llanddwyn Island, famous for being the home of St Dwynwen, the Welsh Patron Saint of Lovers which is celebrated on 25 January.  There’s the remains of the 16th Century Dwynwen’s church as well as Twr Mawr (large tower) lighthouse which was built in 1845 and Twr Bach (little tower) Beacon which was built in 1800.  Newborough Forest, a 2,000 acre nature reserve, backs on to the beach where you’ll find lots of paths including a nature/animal puzzle trail so there’ll be wildlife to see especially red squirrels.

Whatever you decide to do, make the most of your visit with one of The Imperial Hotel’s fantastic breaks for the perfect North Wales walking experience. 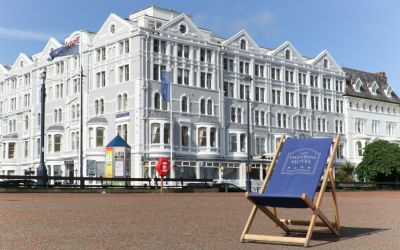 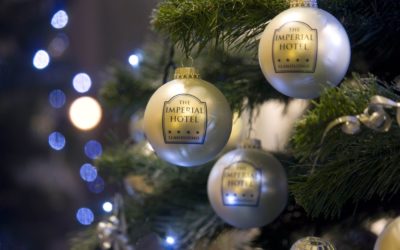